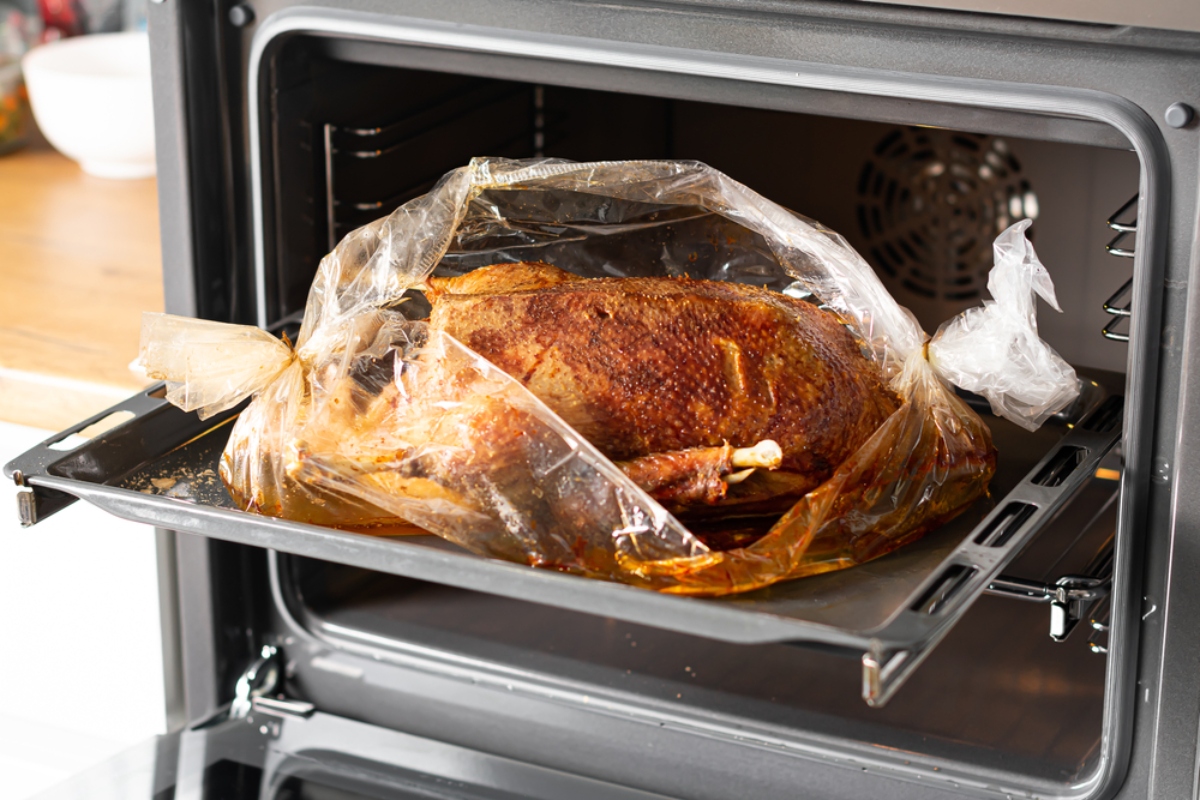 Saran/plastic wrap, otherwise known as cling film in some parts of the world, is mainly used to keep food fresh after its packaging has been opened. For example, if you open a packet of chicken then you should consider re-wrapping the remaining chicken inside the packet in saran/plastic wrap to keep it fresh.

Although this is the most common use for saran/plastic wrap, some people swear by a cooking method that involves using the product inside an oven. Today, we’ll be looking at this method in greater detail and examining whether it’s a safe practice or not.

Why do some people use plastic wrap in the oven?

Using plastic wrap as a cooking aid isn’t conventional by any means, but it’s something that chefs in restaurants do on a regular basis. The method is mainly used with meats, whereby chefs will wrap the meat up in plastic to secure the moisture of the meat and to ensure it is cooked evenly throughout.

The majority of the time, chefs will add a layer of foil over the top of the plastic wrap to protect it from the extreme heat of an oven. Without this protection of foil, the plastic would be in danger of melting and contaminating your food.

Should you use this type of plastic in an oven?

A good general rule to follow when cooking is to avoid using plastics of any kind in an oven. Plastics have a relatively low melting point meaning that they won’t be able to withstand the high temperatures of an oven. Therefore, if you were to use saran wrap in the oven then there is every chance that it would melt and contaminate your food.

While most modern-day plastic wraps aren’t made from harmful chemicals known as phthalates, many people are still understandably wary about the idea of having melted plastic interacting with their food.

The idea of running the risk of harmful toxins contaminating your food, which could leave you and your family becoming ill, isn’t worth it for the sake of a bit of extra moisture on your meat.

What does cling film brands say about oven use?

When you buy cling film from the supermarket, the packaging will usually contain information on whether or not the film is safe for oven use. Here is what some of the biggest brands have to say on the matter:

“Stretch-Tite, as is the case with most plastic wraps, is not for use in conventional ovens, browning units, toaster ovens, or on stovetops.”

“We do not recommend using Glad wraps in the oven.“

“Not for use in browning units, conventional ovens, stovetops, or toaster ovens.“

How do chefs get away with this cooking technique?

Considering all of the top plastic wrap brands advise against using this material in ovens, it seems wrong that chefs all over the world still employ this method in restaurants anyway. The reason chefs get away with this method is due to a combination of two reasons – temperature and foil.

Chefs are experts in their fields so know exactly what temperatures certain foods and materials can withstand. According to a Chemistry Professor, standard plastic wraps usually start to melt after around 225 degrees Fahrenheit. As such, chefs know that providing the plastic-covered meat is slow cooked at a temperature of 200 degrees Fahrenheit there is no danger of the plastic melting.

In relation to the foil, we’ve already explained how chefs effectively use foil to shield the plastic wrap from high temperatures. The combination of working at low temperatures combined with this layer of foil means that chefs can safely use plastic wrapping to cook food in an oven without contamination from melted plastic becoming a factor.

So, can you put saran/plastic wrap in an oven?

After considering all of the issues surrounding melted plastic and also the potential upsides of using it, we’ve come to the conclusion that it simply isn’t worth the risk. While professional chefs might be able to adjust their oven temperatures and use clever foil placement to guarantee meat is cooked safely, they do this for a living – you don’t.

If you still want to cook your meats in a way where the moisture is contained, then check out our alternative method below.

An alternative to using plastic wraps in an oven

Understandably, you have probably been put off using plastic wraps in the oven but fear not because there is an excellent alternative that is perfectly safe. This alternative method involves using something simply known as an ‘oven bag’ to cook your meats in while in the oven.

These oven bags are really simple to use. All you have to do is wrap your meat up inside the back and seal it before placing it on a baking tray inside the oven. While the meat is cooking, the bag will ensure that all of the moisture within the meat doesn’t escape, leaving you with a juicy piece of meat to enjoy.

Oven bags are usually made out of heat-resistant nylon which, ironically, is a type of plastic. Fear not, though, because these oven bags are specifically made to interact with food in ovens so there is no danger of harmful chemicals leaching off them and contaminating your food.

Can you use cling film in the microwave?

On top of that, there are certain plastic wraps that come with a certified ‘microwave safe’ sticker. Therefore, to be on the safe side, we’d recommend that you purchase one of these products if you are intending on using plastic wraps in a microwave.

Plastic and extreme heat isn’t a good combination at the best of times, but even more so when food is involved. To protect you and your loved ones from food poisoning, avoid using saran/plastic wraps in the oven and use a bespoke oven bag instead.