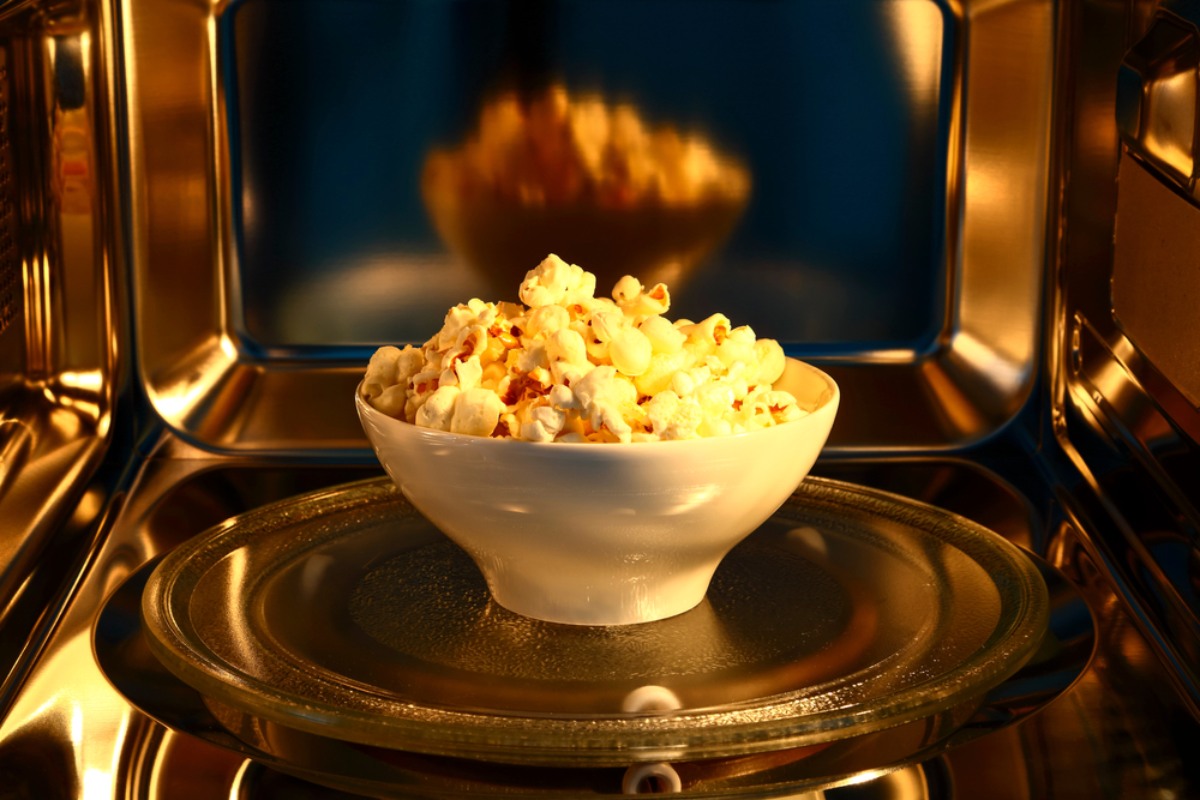 If you have a box of microwavable popcorn in your treat cupboard but your microwave is playing up, don’t worry because there are still ways in which you can enjoy it. Today, we’ll be looking at whether you can put microwave popcorn in the oven and a selection of other ways to make this popular snack when your microwave is out of action.

How does microwave popcorn work?

Microwave popcorn is arguably the most popular method for making popcorn in today’s day and age. These packets of corn can be purchased from all good supermarkets and usually produce warm and tasty popcorn in a matter of minutes.

When you open up a box of microwave popcorn, you’ll notice that there is just a selection of corn kernels inside the box. These kernels look nothing like fully developed popcorn but they are able to transform into that familiar look through heat exposure.

Once they’re inside a microwave and exposed to the machine’s heat and power, the water inside the kernels begins to rapidly move until the pressure causes the kernel to explode. When this happens, the bag/packaging that the microwave popcorn is heated in traps the moisture, allowing the corn to ‘pop’.

Once the allotted time is up, this process will have occurred in the vast majority of kernels and you’ll be left with hot, movie-theatre-style popcorn ready to enjoy in your front room.

Can you put microwave popcorn in the oven? The simple answer

Now that you know how the process works, you may be thinking that all you need for microwave popcorn to develop is a substantial amount of heat. If that is the case, then surely placing them in an oven will produce the same results as a microwave. Unfortunately, this isn’t the case.

This paper is designed to be able to withstand the rapid and intense temperatures of a microwave but not the ever-growing, relentless heat of an oven. Once the bag is burnt away, you’ll just be left with pieces of kernel flying all over the inside of your oven.

The second reason is also related to the fact ovens aren’t heated in the same way as microwaves. Although ovens eventually reach temperatures higher than microwaves, they take longer to get there. For kernels to ‘pop’, the heat needs to be instant and intense. In an oven, the moisture inside these kernels will slowly evaporate, causing them to dry up rather than ‘popping’ like they do in a microwave.

Can you reheat microwave popcorn in the oven?

Therefore, if you’re looking to reheat popcorn then you’re safe to do so in the oven. To regain the warm, crispy exterior of your popcorn, leave it in the oven at 250 degrees Fahrenheit for around five minutes. Just make sure you place the popcorn in an oven-proof bowl rather than in the bag of paper that microwave popcorn comes in.

Can you put microwave popcorn on the stove?

Microwave popcorn can be heated on a stove. To successfully use this method to make popcorn, you won’t be following the same steps as you would do if you were using the conventional microwave method, though.

Instead, you are going to pour out all of the corn kernels into a saucepan and place the paper/packaging that usually accompanies them into the microwave to one side. Pour in some extra oil, place a lid over the saucepan and then turn the heat up as high as it can go.

Keep the kernels on this high heat for 4-5 minutes and watch as the kernels explode and become fluffy balls of popcorn. After the majority of kernels have ‘popped’, turn down the heat and allow the popcorn to cool down. Once the popcorn is no longer piping hot, tip it back into the paper/packaging that the kernels originally came in and tuck in.

Can you put microwave popcorn in an air fryer?

Some people find that making popcorn on a stove is incredibly messy. After the popcorn has been formed, a lot of the oil is left in the pan making it a nightmare to try and clean. For people who like to reduce mess, making microwave popcorn in an air fryer could be the way forward.

Just like the stove method, you need to leave the paper bag on the side when using microwave popcorn in an air fryer. Place the kernels inside the air fryer and add a few tablespoons of oil and you’ll be good to go. Allow more time than you would if you were using a microwave or a stove before checking to see if the popcorn is ready.

One downside to using an air fryer to make popcorn is the typical size of an air fryer basket. You will be unable to use a full packet of kernels in one go if you use an air fryer, meaning the process of creating a full batch of microwave popcorn will take significantly longer. Once you have finished, place the air fryer basket in the dishwasher for a thorough clean.

Microwave popcorn can be made using a variety of different kitchen appliances, including microwaves, stoves, and air fryers. However, you should avoid using it inside an oven, unless you want to start a fire or end up with dry, tasteless popcorn.